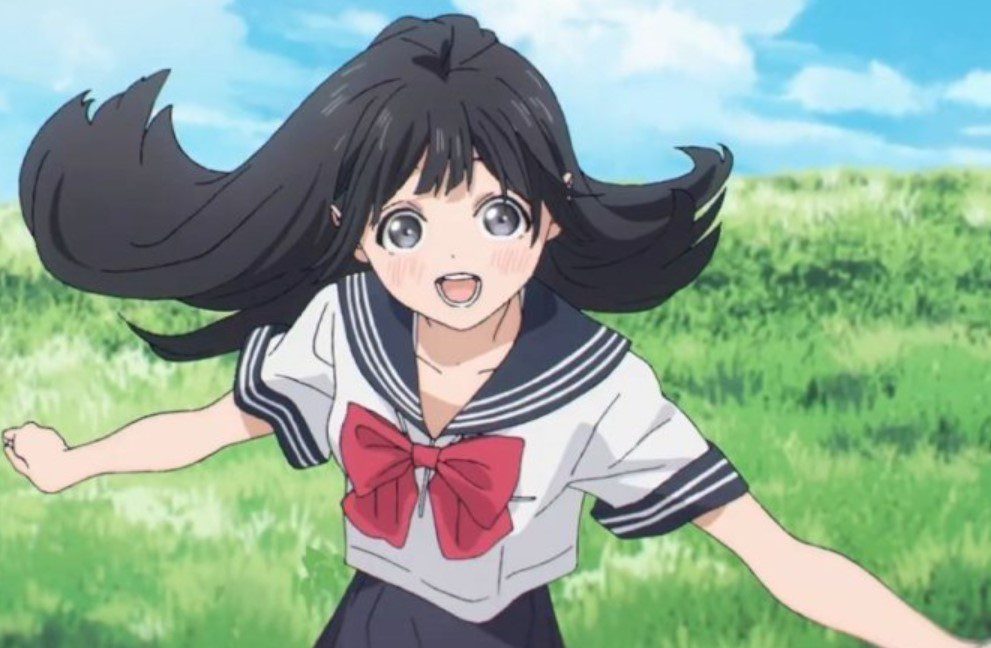 Episode 2 of Akebi’s Sailor Uniform reveals a girl who dreamed of becoming an idol, but faced many obstacles in her life. One day that girl was jogging in town and she tripped. The girl thought she was performing live, but realized she was still in town when she stopped. The girl realizes that she wants to become an idol like Miki. Akebi’s sailor uniform reveals the mysterious idol that inspired the girls to pursue their dream. Komichi jumps into the water and promises to make a lot of friends. Taira drives by with a truck and wonders how shallow the water is.

Taira and Komichi talk together, and Komichi reveals that she was swimming fully clothed. He told her to get in the back of a truck and they could go home together. Komichi admits that he has entered the selection exam at the Roubai Academy. Taira wonders if Komichi’s mother attended the same Academy. Komichi and Taira talk about the Roubai Academy, and then he drops her off in front of her house. Komichi enters the house and discovers that her sister is busy with school work and her mother is sewing something.

Komichi remembers when he was doing his interview. Komichi told interviewers that he chose Roubai Academy because he dreamed of wearing a sailor uniform during the interview. She realizes that she was scared during her interview and exam. Komichi is glad he made it and his mother takes action as she will sew him a uniform. Komichi told his mother that he would wear a new uniform as he expected that. She wonders if someone like her will look good wearing it. But her mother knows how she will sew it and make it fit.

Komichi’s sister noticed that Komichi was playing games and reminded him to stand up as his mother couldn’t take the correct action. The mother comments that Komichi has gained a lot of weight and wonders if he spent a lot of time eating and studying. She goes out with the younger sister and Koimichi realizes that he must do some exercises. Komichi wants to keep his shape. She follows them and they go shopping together. Her sister teases her into talking about sailor uniforms even in her dream.

Komichi wonders why Kao always finds a way to get to her. They ask Komichi about the other students who will be attending Roubai Academy. Her mother reveals her past when she attended the same Academy and Komichi becomes emotional. The trio then arrive at Fabricks Store Nihori. Komichi’s mother told her to be herself and keep her confidence and smile. They find a twill fabric and the mother reveals that they will sew skirts and T-shirts with it. The trio bought all the supplies they needed and Komichi realized that he would be attending classes soon.

Episode 2 of Akebi’s Sailor Uniform will be released on January 16, 2022. Kao notices that Komichi has been humming all day and wonders if he thinks about his feelings. Komichi comforts Kao after realizing that they will not attend the same school. Later, Komichi helps his mother with everything and spends a lot of time with Kao. The next day, her mother finishes sewing the uniform and Komichi wears it. Let’s check out the official details for Akebi’s Sailor Uniform Episode 2.

You can watch Akebi’s Sailor Uniform episode 2 online on ANIPLUS and Bilibili Global on Sunday at 12:30 pm JST. You can also watch Akebi’s Sailor Uniform episode 2 online on Crunchyroll and Funimation for those in the UK. Komichi went to the Academy with his mother on his first day. She learns that her mother was a legend. Komichi begins to make friends and writes down Kizaki Erika’s name. Let’s meet when episode 2 is released.