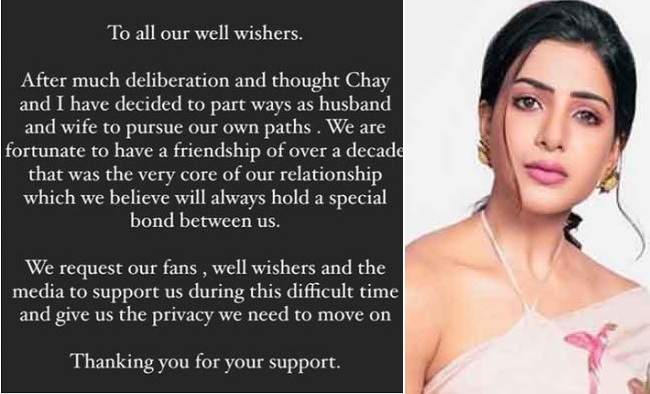 It was a great Andhra who broke the news of Samantha and Naga Chaitanya’s divorce at the beginning. Although we obtained the information from reliable sources, we kept it as a rumor.

The couple, popularly known as ChaySam, confirmed the news in an official statement from Naga Chaitanya, shared by Samantha, which they released on Saturday. They asked their fans and media to allow them privacy.

In the statement addressed to “our supporters”, Naga Chaitanya said: “After much deliberation and reflection, Sam and I have decided to separate as husband and wife to go our own ways. We are fortunate to have a friendship of more than a decade. that was the core of our relationship and that we believe will always maintain a special bond between us. “

Naga Chaitanya added in the shared statement: “We ask our fans, supporters and the media to support us during this difficult time and give us the privacy we need to move forward. Appreciating your support.”

The rumor about the marriage breakup intensified last month after Samantha removed ‘Akkineni’ from her name on her Twitter account, but neither addressed the rumors head-on. Samantha and Naga Chaitanya got married in Goa in 2017.