Those of you who have downloaded iOS 15 you might have noticed new functionality in iMessage. When someone sends a photo, video, or group of photos, a download icon appears in the chat stream right next to the media. The icon is a small square with a down arrow running through it. Click the button and it will save the image to your photo sequence, which Apple displays by transforming the icon into a check mark.

My sister shared a photo of her dog, but the ugly icon next to it distracts me.
Credit: screenshot: rachel kraus / mashable

Previously, to save an image that someone had texted you, you had to click to expand that image, click the square with an up arrow icon, and then scroll down to the “Save Photo” option.

SEE ALSO: Which wireless headphones have the best sound? These are our best options.

This process was definitely a bit complicated and not that intuitive. I understand how difficult it might have been for some users to find out. However, I cannot endorse the design and placement of the new method. It’s clunky, it makes the tech too visible, and frankly it’s kind of ugly – something you don’t really expect from Apple.

Apple seems to have taken intentional steps to make iMessage more visual: it lets you select an icon for a group name, reply to text messages with “heart” and “!!” and represents people through their pictures, or a photo of their initials, if you don’t select a picture for a contact, instead of just their names.

It also redesigned the way you send photos and videos in iOS 15. If you send more than one image in a single message, it stacks the images on top of each other. Now it looks more like a stack of photos, which you can click to expand. That solves the problem of a bunch of photos clogging your feed.

A stack of photos looks good and takes up less space in a visually pleasing way! But the download icon gets in the way.
Credit: screenshot: rachel kraus / mashable

But next to those “stacks”, in the middle of a lot of empty space, is the download icon. It’s kind of electric blue, so with my background in dark mode, it immediately caught my eye.

I think what I disagree with is that in a media stream, it puts something that is simply about utility in the middle of everything. It’s a small thing, but I’ve found that seeing it bothers me. It took me out of the conversations, distracting me from the content.

Of course, the new location of the feature will come in handy for people who just want to download images quickly. But even on the utility side, it has problems. Along with a stack of photos, it downloads all the images, which can be annoying if you’re only trying to download one. I also noticed a tapback on a stack of photos overlapping the download icon, which is like a UX traffic jam. 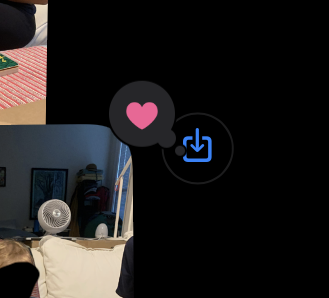 Clearly, Apple was trying to make downloading photos from iMessage easier and more intuitive. But he did it without his usual care and style. I’m sure we’ll all get used to it. And I’m not angry, just disappointed.