The fuel crisis is getting worse in London and the south east, an industry expert warned today, as retailers demand urgent action to restock filling stations.

Soldiers will start delivering petrol from Monday in a drastic bid to end the chaos of recent days.

Nearly 200 military drivers are being deployed to the worst-hit areas, Downing Street confirmed.

However, industry bosses are calling for certain ‘dry’ sites to be prioritised, amid warnings for motorists that they should expect a rise of up to 3p a litre at the pump.

Brian Madderson, chair of the Petrol Retailers’ Association, told BBC Radio Four’s Today programme: ‘In the north, Scotland, some parts of the Midlands there was a distinct improvement in fewer dry sites, however in London and the south east, if anything, it had got worse.

‘I passed no less than five filling stations in Kent last night which were dry. It’s a big problem.

‘This isn’t going to be the major panacea, it’s a large help but in terms of the volume, they’re not going to be able to carry that much.

‘We need a prioritisation of deliveries to filling stations, particularly the independent ones in neighbourhood sites in London and the south east starting immediately.’

Mr Maddison said local retail sites lying closed without fuel affects consumer confidence, and called on the government to speed up deliveries to those areas over the coming days.

‘This week we’ve seen the wholesale price for fuel rice by 3p a litre for unleaded and diesel,’ he added.

‘This is nothing to with the driver shortage, this is entirely to do with global factors. Brent Crude has risen by nearly 50% this year and has been skirting $80 a barrel recently.

‘At the same time the pound against the dollar has weakened so those two factors have pushed up the wholesale price.

‘Next week, because forecourts have been dry, new stock coming in will be at the higher price to them, so please expect even 3p an increase at the pump. This is not profiteering, this is genuine wholesale price increases caused by global factors.’

However, Health Secretary Sajid Javid said the fuel situation is ‘stabilising’ in most parts of the country and the military is being deployed as a ‘precaution’. 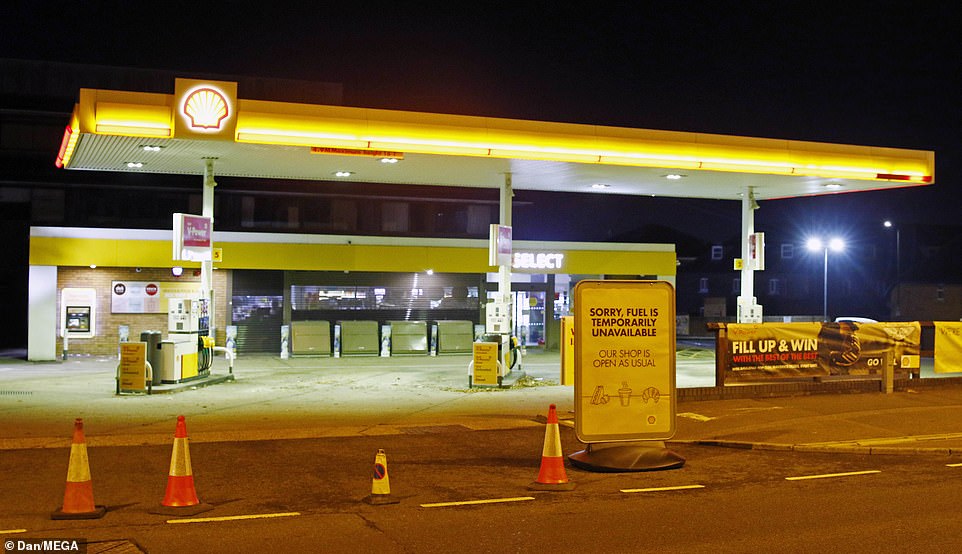 Industry bosses are calling for certain ‘dry’ sites to be prioritised, amid warnings for motorists that they should expect a rise of up to 3p a litre at the pump 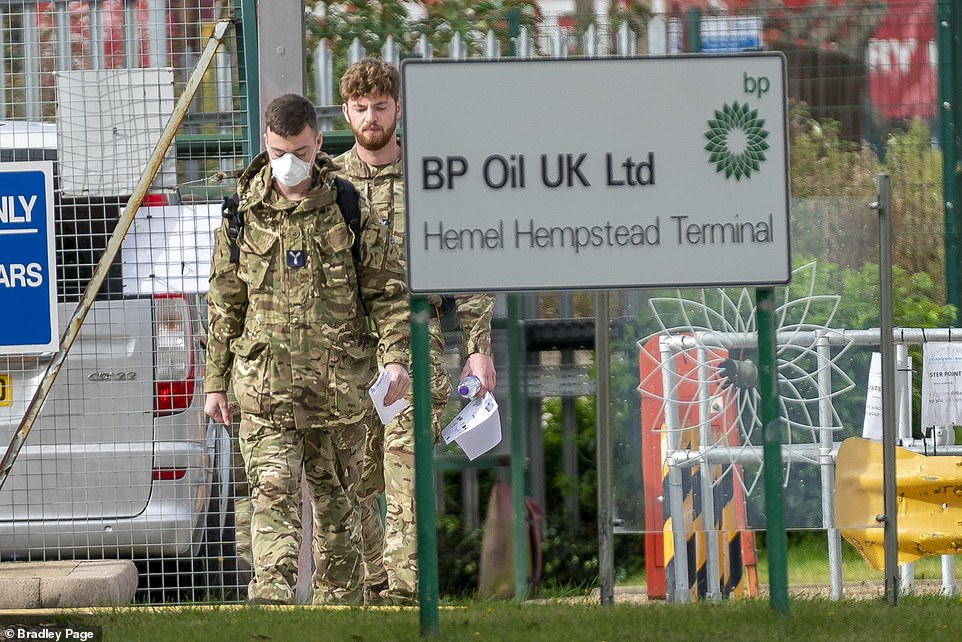 He told Sky News: ‘I think it is right that as a precaution that the Government has asked the military to help.

‘I think that is the right measure to take to make sure that people have all the confidence that they need.

‘I think that will further stabilise the situation and give more confidence.’

In an announcement on Friday evening, the Government said 300 fuel drivers would be able to come to the UK from overseas ‘immediately’ under a bespoke temporary visa which will last until March.

Some 4,700 other visas intended for foreign food haulage drivers will be extended beyond the initially announced three months and will last from late October to the end of February.

A total of 5,500 poultry workers will also be allowed in to help keep supermarket shelves stocked with turkeys before Christmas.

The Government has said these workers, who can arrive from late October, will now be able to stay up to December 31 under the temporary visa scheme.

But the Government added that the visas will not be a long-term solution and it wants to see employers make investments in the UK domestic workforce instead of relying on overseas labour.

It said it is also working with the industry to find long-term solutions to the shortage of HGV drivers and to encourage more people to enter the logistics sector by improving pay and conditions.

It comes as Rishi Sunak warns shortages of goods could continue until Christmas.

In an exclusive interview with the Mail, the Chancellor says the supply problems are global and cannot be fixed by Britain alone.

‘These shortages are very real,’ he adds. ‘We’re seeing real disruptions in supply chains in different sectors, not just here but around the world. We are determined to do what we can to try to mitigate as much of this as we can.’

He also acknowledges that soaring inflation will leave millions of families facing a ‘challenging’ winter.

But he defends his decision to remove the £20-a-week top-up to Universal Credit next week, saying he would rather ‘throw the kitchen sink’ at training and employment schemes.

He says he remains ‘full of confidence and optimism’ about the economic recovery, despite what some ministers are describing as an ‘EFFing crisis’, involving problems with supplies of energy, fuel and food.

With the £70billion furlough scheme finally ending this week, the Chancellor says he is optimistic there will be no need for further lockdowns this winter.

‘It feels to me like we’re stepping out of the coronavirus crisis, and can think about the future with a renewed sense of confidence and optimism,’ he says.

His comments come as: 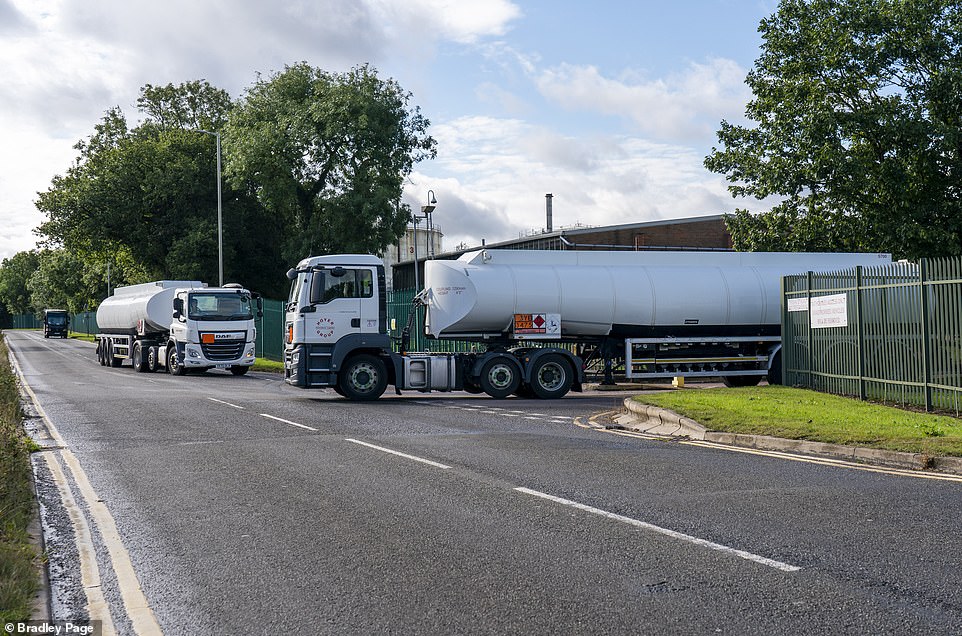 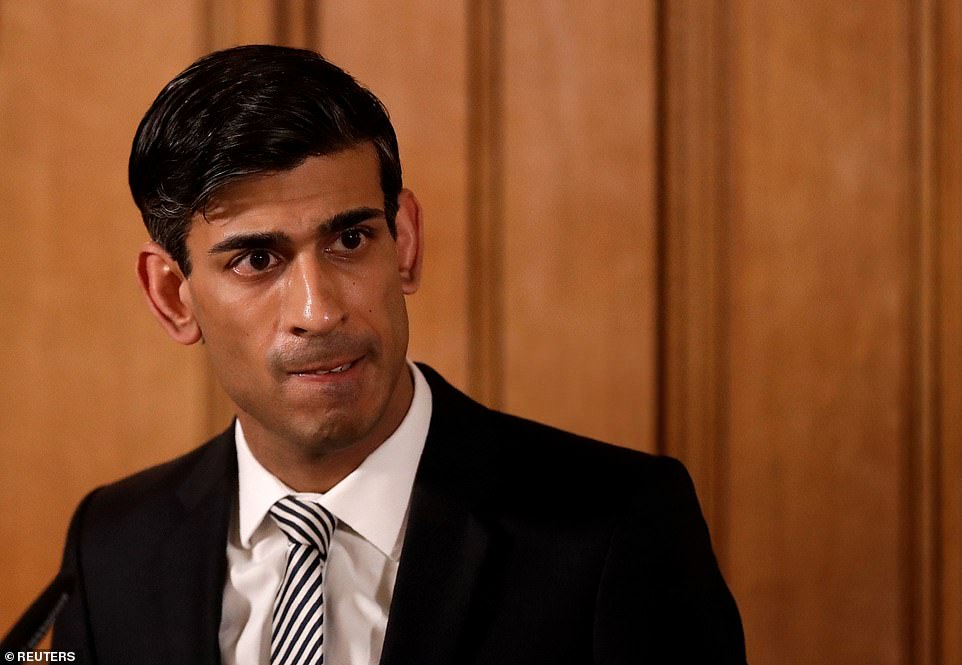 In an exclusive interview with the Mail, Chancellor Rishi Sunak (pictured) said the supply problems are global and cannot be fixed by Britain alone

In his wide-ranging interview, Mr Sunak says he ‘agonised’ over last month’s decision to break the Tory manifesto pledge on tax by raising national insurance to pay for health and social care reform.

And he reveals tensions with Boris Johnson over spending, saying he had joked about ‘taking away his credit card’ because he takes his ‘responsibility to looking after the public finances really seriously’.

The decision to send in the Army to tackle the petrol crisis comes after a week of U-turns in which ministers have flip-flopped repeatedly on the issue.

It came just 24 hours after Treasury minister Simon Clarke claimed the situation was ‘absolutely back under control’.

Downing Street yesterday insisted there was plenty of fuel in the UK, and that shortages had been caused solely by panic buying.

Policing minister Kit Malthouse said the situation would ease in ‘a week or so’, but acknowledged that further action might be needed if matters ‘deteriorate further’.

But with filling stations continuing to run dry across large parts of the country, the Prime Minister last night decided he could delay no longer.

In a further sign of Government alarm over the scenes at forecourts, No 10 last night said temporary visas for petrol tanker drivers would be fast-tracked.

Ministers had originally aimed to issue 5,000, three-month visas from the end of this month to help secure supplies over Christmas.

But Downing Street said that 300 of these would now be issued ‘immediately’ to firms who can find foreign drivers to operate their vehicles. 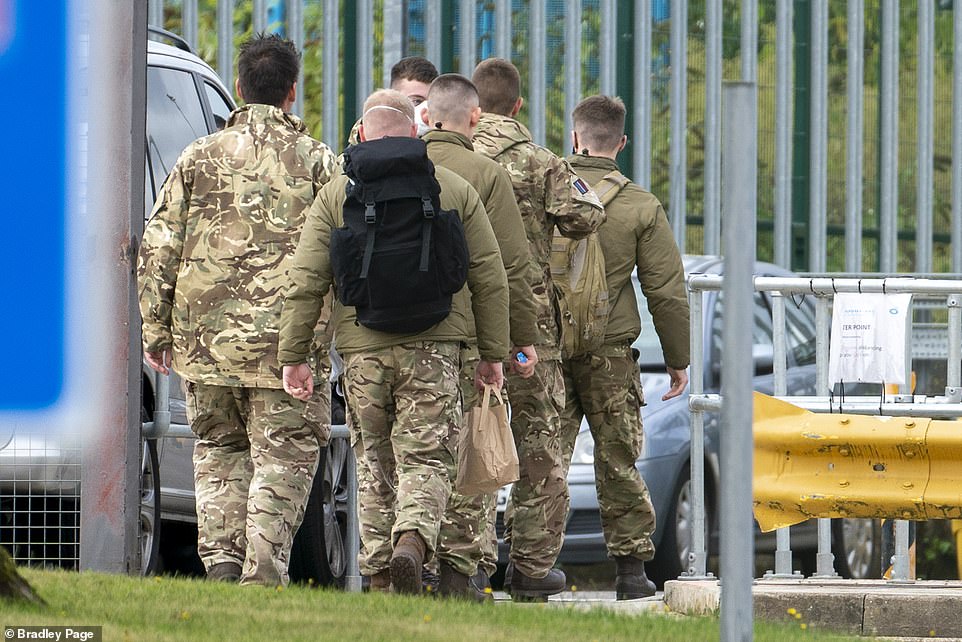 The decision to send in the Army (pictured: military at Buncefield fuel storage) to tackle the crisis comes after a week of U-turns in which ministers have flip-flopped on the issue 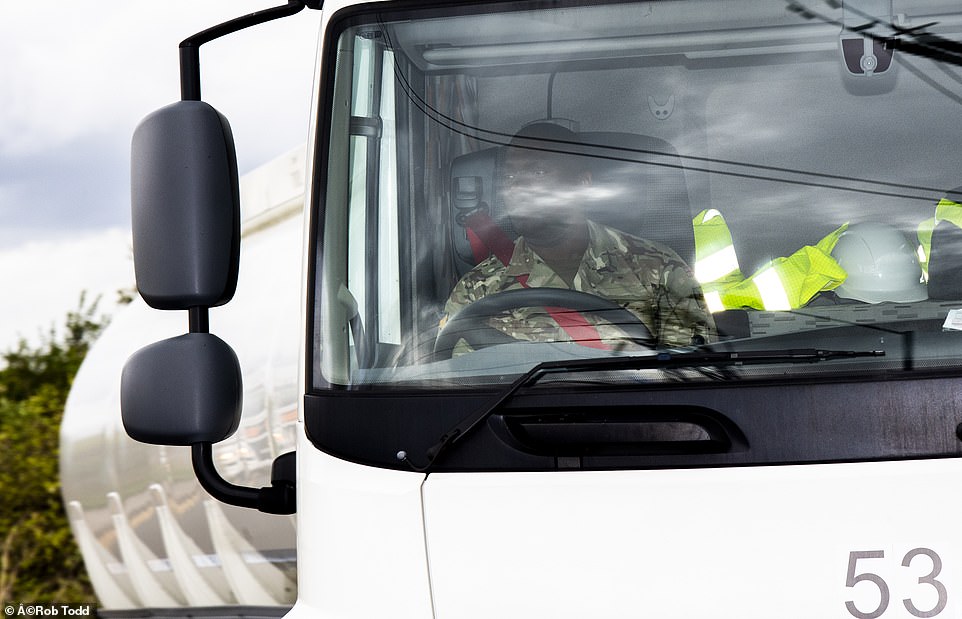 Downing Street yesterday insisted there was plenty of fuel in the UK, and that shortages had been caused solely by panic buying. Pictured: A soldier in an oil tanker in Purfleet

Cabinet Office minister Steve Barclay said the ‘decisive action’ would ‘tackle the short-term disruption to our supply chains, and in particular the flow of fuel to forecourts’.

He added: ‘We are now seeing the impact of these interventions with more fuel being delivered to forecourts than sold and, if people continue to revert to their normal buying patterns, we will see smaller queues and prevent petrol stations closing.’

The Petrol Retailers Association, which represents independent filling stations, warned the queues were set to continue unless supplies increased.

Executive director Gordon Balmer said the independents had been particularly hard hit, with one in four reporting they had run dry.

Sir Keir Starmer called on the PM to take ’emergency’ action to address the shortage of lorry drivers which, he said, was threatening to ruin Christmas.

The Labour leader suggested parliament should be recalled to rush through legislation to keep Britain’s shelves from running empty.

In a sign of the seriousness of the issue, trade minister Penny Mordaunt took the unusual step of going public about the ‘awful and stressful’ situation in her Portsmouth constituency.

By Mark Nicol and Arthur Martin for the Daily Mail

Troops were yesterday seen finalising their training to deliver to fuel-starved forecourts.

As our exclusive images show, RAF airmen were arriving for a day of intensive instruction at a BP oil refinery in Hertfordshire.

They belonged to a ‘reconnaissance party’, according to defence sources.

More are expected at the site in the next few days as the Government ramps up ‘Operation Escalin’ – the codename for the plan to drastically reduce pressure on fuel supplies.

It follows days of failed attempts by ministers to ease panic-buying at forecourts across the country. 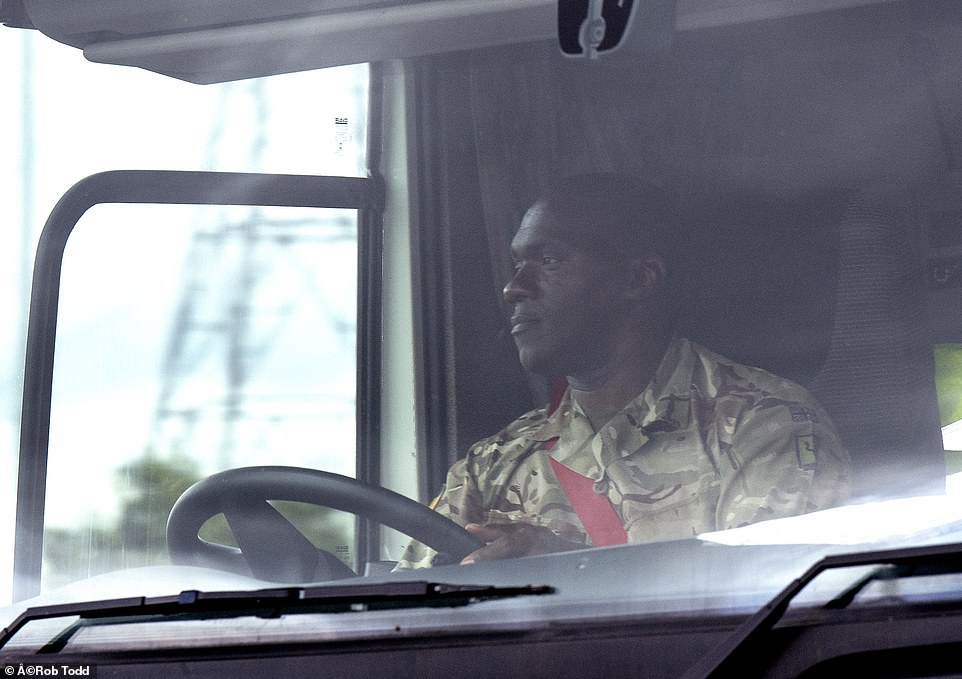 Around 300 troops have been on standby since the start of the week and last night Defence Secretary Ben Wallace confirmed 200 of them will begin deliveries from Monday.

A government source said motorists might see some military drivers on the roads today.

Policing minister Kit Malthouse insisted the situation was ‘stabilising’ but might take another week to be resolved.

The Government also dismissed reports that forecourts were running out of fuel faster than it could be delivered.

Officials also played down claims from retailers that more than half of 8,380 filling stations were suffering severe shortages.

But the sight of troops on the roads is likely to raise public fears. 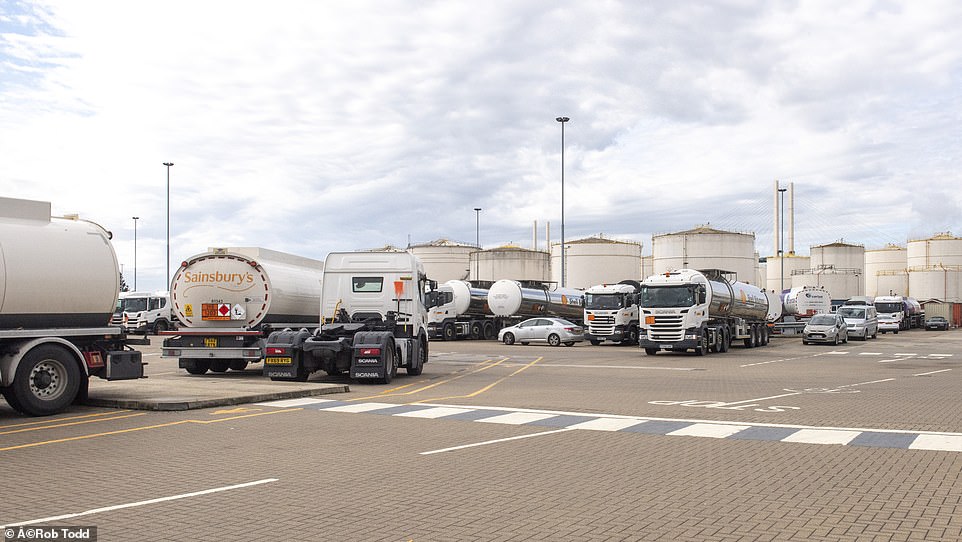 The Government also dismissed reports that forecourts were running out of fuel faster than it could be delivered (Pictured: Site where RAF airmen are being trained)

Sir Keir also called for an emergency summit with haulage industry leaders to focus on long-term issues such as pay and conditions.

Boris Johnson was last night facing the prospect of the fuel crisis overshadowing the Conservative Party conference, which starts in Manchester tomorrow.

Government insiders were said to be referring to the ongoing disruption as the ‘EFFing crisis’, as it includes energy, fuel and food.

The crisis has sparked a spate of fuel thefts, with criminals stealing 30,000 litres of diesel from a family-run truck shop in Hampshire. Thieves have also been taking fuel from parked cars.

BP, Shell, Esso and Texaco have placed a £30 limit per customer at almost 400 garages while smaller independent stations were reportedly missing out on deliveries.

Industry insiders fear the situation may worsen over the weekend as millions of families attempt day trips in their cars. 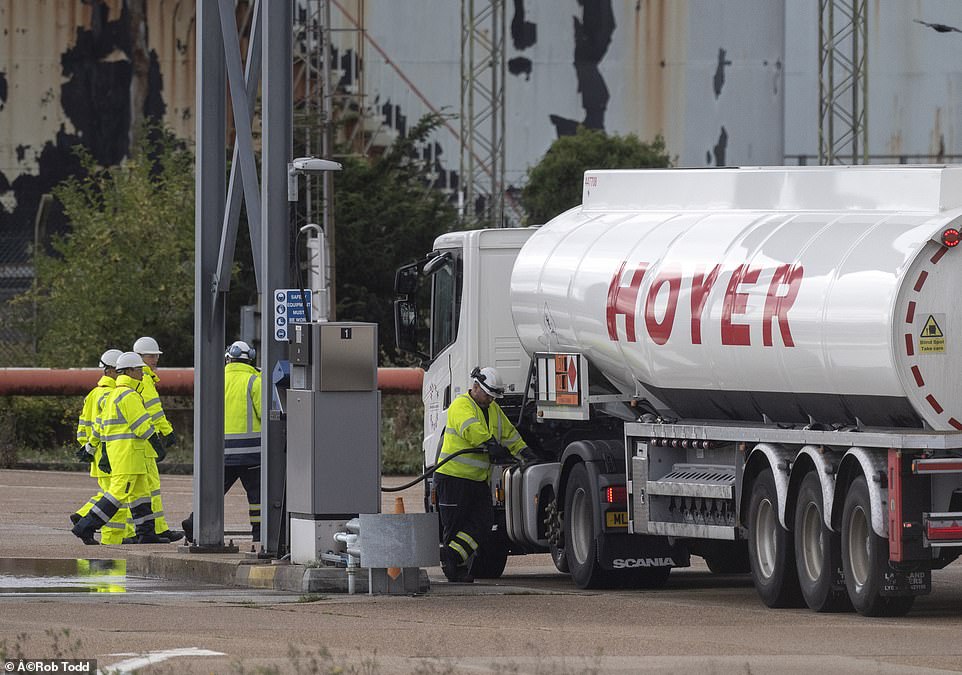 Boris Johnson was last night facing the prospect of the fuel crisis overshadowing the Conservative Party conference, which starts in Manchester tomorrow (Pictured: Oil Tanker refuels at the Esso Fuel Terminal in Purfleet today, as the oil crisis continues)

London and the South East remained hardest hit by the fuel crisis yesterday with the situation reportedly improving in northern England and across Northern Ireland, Scotland and Wales.

Gordon Balmer, of the Petrol Retailers Association, said improvements in fuel supply to stations were too slow, with 26 per cent of the UK’s 8,380 stations reporting yesterday that they were ‘completely dry’.

Another 27 per cent had only either diesel or petrol.

Mr Balmer warned: ‘While the situation is similar to recent days, there are signs that it is improving, but far too slowly. Until independents start getting frequent supplies, we will continue to see long queues at forecourts.’

Even if the fuel debacle is resolved, ministers expect problems in other areas to continue.